Somnath Hembram, 24, has returned home after driving a truck from Chennai. A local football talent, he has to drive a truck to earn a living. Tribal football talents like Somnath are nipped in the bud due to poverty.

Somnath alias Kunu played for Bankura district of West Bengal as a striker. He was one of their key craftsmen in an inter-district football tournament in 2014.

Dust and government indifference have snatched the glow of his brass trophies sitting in his hut. “They are of no use to me,” he said.

Owing to their physique, strength and speed, tribal footballers like Somnath dominate local football tournaments of West Bengal. But poverty and lack of infrastructure in rural areas have killed their dream of wearing the national jersey.

Veteran coach Purnendu Sarkar informed The Observer: “They are mired in bottomless poverty which doesn’t allow them to play for long. For even a very small income, they take up other jobs and gradually get lost from football.”

Dev Besra from Manbazar of Purulia district has made football his profession. At 30, he still plays local tournaments for clubs. He is paid Rs 1,500 to Rs 2,000 for every match. Players like him do not have acquaintances in the big clubs in Kolkata, so they have to await their trials and selection in Kolkata for months. “The financial condition of my family is not strong enough to bear so much expenditure,” he shared.

Shantanu Bauri, 17, aspires to play for the top football clubs in Kolkata. But due to his poor financial condition, he can’t shift to Kolkata from Bankura. “My family is scared of the costs of living in a metro city,” he said.

Samayita Sports Academy imparts football coaching to tribal boys and girls since its establishment in 2010. They charge Rs 20 fees per month which is exempted for a few people. About 150 boys and girls, between 6 and 21, train in two camps.

Sukhendu Jana, manager of the Academy, said: “We are trying to… find sponsors who will help us to provide them residential amenities. Proper nutrition is necessary for every athlete; an empty stomach will never let them go beyond this.”

Besides poverty, he pointed out the communication gap between tribal footballers and football organizations. “I don’t know why they do not arrange trials in tribal areas, which are goldmines of young talent.”

The book Soccernomics mentions that India has to improve its grassroots standard to achieve glory in football.

Franz Gastler, co-founder of the NGO Yuwa and football coach, said India performs badly in football because its talents are not shaped by proper coaches at the grassroots. He has been a part of several selection processes in Jharkhand. He blamed a corrupted selection process as another drawback of Indian football. “Ten years back, a deputy CM of Jharkhand sent a list of 7-10 footballers, and we had to select them,” he added.

Rahul Sheikh, who has worked in the management teams of many sports academies and football teams, said the infrastructure of Indian football is very poor compared to that in Europe. The facilities available are confined to cities, so the tribal footballers don’t get to use them. Lack of opportunity diverts them from football to family responsibilities.

Young Sanjay Bauri has played for Bankura district. He had to take up the job of house painting. “I still play football, but only to satisfy my soul.”

Somnath bemoaned: “I received praise from a lot of football experts who saw me playing. But no one helped me to get an opportunity on a bigger platform.”

Experts say it is necessary to spot tribal talents at the grassroots level to augment the quality of Indian football. Dum Dum Football Academy coach Bipro Bose said the West Bengal government is trying to bridge the gap between rural footballers and the clubs by organising tournaments like the Jangalmahal Cup. 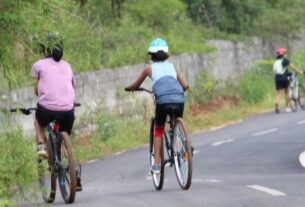 Sporting activities in B’luru struggle to get back on feet