Public spaces in Bengaluru, such as pavements and skywalks, are not accessible to the elderly and people with physical disabilities.

Yathindra, a person suffering from polio, informed The Observer: “Because of my condition, I can’t climb stairs easily. I wish skywalks were made accessible to people like me. Some of the skywalks don’t have elevators. Even if they have, they are not functional. The skywalk near Majestic has an elevator, but it is not operational.”

BBMP had decided to make 23 out of 31 skywalks user-friendly by providing elevators. But according to a report in The Times of India, only two are functional.

Abhinandan, whose grandmother is wheelchair-bound shared: “We are unable to take her anywhere for shopping. Most pavements are not designed with ramps. Even TenderSure roads cannot accommodate wheelchairs as they have bollards.”

The bollards were introduced on TenderSure roads to prevent two-wheelers from illegally riding on pavements. But the decision has caused inconvenience to people on wheelchairs.

Asked about the problem, Nagendra Naik, chief welfare officer at BBMP, said: “The engineers are directed to maintain a certain distance between the bollards under the revised guidelines.”

Regarding the provision of elevators in skywalks, he said: “BBMP has started the work of installing elevators. Wherever they are not functional, repair work begins immediately.”

Dr V Ramesh, an expert on urban planning and public infrastructure, explained: “The facilities provided for disabled people in India are minimal compared to other countries. They have parking slots exclusively for disabled people and the elderly. The reason for this apathy is a lack of awareness about the difficulties faced by this minority community. An awareness campaign about the struggles faced by the disabled and the elderly would encourage ordinary citizens to advocate their rights.”

60% signage in Kannada is a headache, say traders 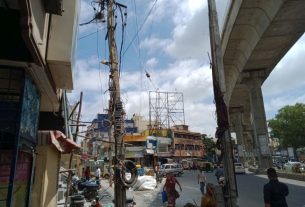